Luxembourg legislation makes it perfectly clear, that we live in a country where any type of violence is condemned and deemed unacceptable. Furthermore, the suffering of the victim is recognized and acknowledged. Any person, independent of their environment could be confronted with or suffer from violence at any moment and in any place be it in public transport, at work, even in their own bedroom. When violence occurs in intimate relationships, the situation becomes very complex and the suffering very intense. Violence is a societal problem which must be urgently addressed.

In this context, we define as violence any regular abusive behaviour, words or gestures used aggressively against another person. We tend to think that people become violent when they lose their self-control. This holds true in a case where there is one incidence of violence. However, when the violence occurs two, three or four times, the aggressor and victim are trapped in a relationship of violence.  In such a case, violence is used as a means to dominate and affirm the aggressor‘s power over their victim.  Violence can be used to manipulate and can be extremely destructive both physically and mentally.

The experience of violence is personal. Violence begins from the moment a person feels humiliated, degraded or hurt. The person feels his/her boundaries or limits. It is not the aggressor who decides where the violence begins. If a person perceives an act to be violent, it is violent and consequently we must refer to it as violent. It is important that people trust their own feelings; if a person’s actions hurt us, it is important that we address them to solve the issue.

There are different types of violence:

These different types of violence often occur in the home and within families. The majority of victims are women and children who are at the mercy of a father, partner or ex-partner of the woman.

Nevertheless, there are more and more men who testify that their partners have been violent towards them.

We use the term domestic violence to refer to violence that occurs in the intimacy of a family.  This includes violence in a couple, violence of parents towards their children or children towards their parents etc. Violence can also occur in the workplace. In such a case we would refer to the violence as bullying.

Violence can therefore, affect every single one of us, independent of age, gender and social class. It can happen anywhere. If you feel affected by violence, it is important to talk about it.

The cycle of violence 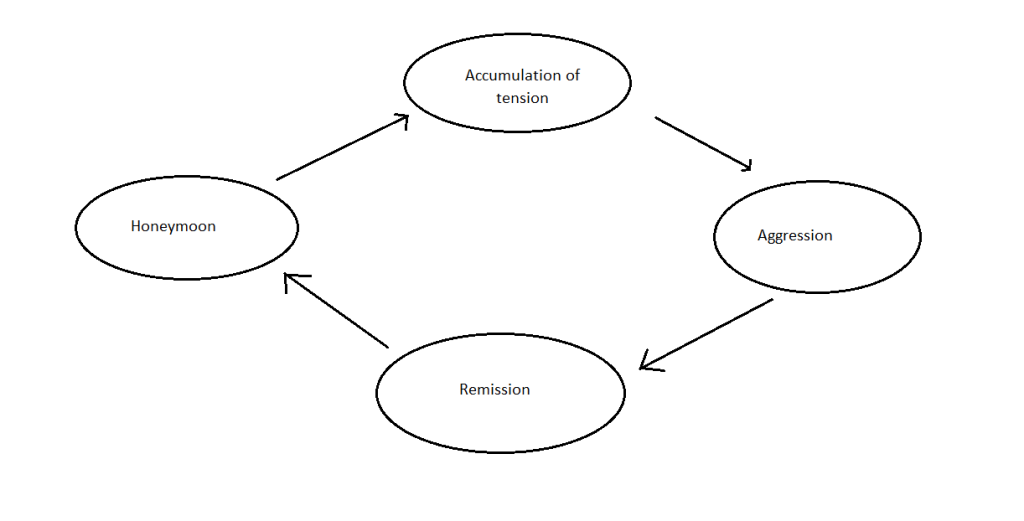 The cycle of violence is a characteristic of domestic violence and allows us to differentiate between domestic violence and a conflict or dispute between couple. In a dispute, we are talking about a loss of control. A person might lose control and might use violence as a last resort. In this case, the aggressor will deeply regret his/her action, sincerely ask for forgiveness and not start again. Furthermore, the partner will have the possibility to say that this type of behaviour is not correct and is unacceptable. With a dispute the couple’s symmetry and equality remain intact.

In the case of domestic violence, the couple is stuck in a vicious circle called the cycle of violence.  This cycle is composed of 3 phases that become repetitive:

It is important to know that violence is not only physical beatings or blows. The violence starts well before the physical violence. Threats, verbal attacks or insults are considered to be violence and should be discussed.